Note: This recipe uses a smoker for cooking.  If cooking on a gas grill click here.

Most of today’s hams are sold cured, smoked and (if you’re not too picky) ready to eat, but geeze! they are so BORING.  Transforming ho-hum ham into a real treat is easy.

Most conventional (cheap) hams are massively brined, because the meat market loves to sell you salt water at meat prices.  The label on the ham I’m using states that “23% of the weight is added ingredients”, which is nearly 3 lbs. in a 12 lb. ham.  The meat is completely saturated and doesn’t have room for more flavor or anything else.

Let’s begin by splitting the ham and stripping out the excess brine, then we’ll infuse wonderful flavor deeply into your ham.

Splitting the ham is the most difficult part of this recipe, but all it takes is a sharp, thin-bladed knife and patience.  Hams are roughly oval in cross section and like our legs, the bone isn’t centered, but off toward the skinny end of the oval, meaning there’s a lot more meat on one side than the other. The shank is the knee joint, and again like your own leg, has one big bone on top and two on the bottom. Look at the one bone side and probe with your knife to locate the bone.  Start your cut at the bone on the skinny end and follow the bone all the way down and then back in to the center, roughly splitting the ham into halves.  Skip over the two-bones and extend your cut all the way to the edge of the meaty end then back up to the single bone. Then, stick your thumbs in the cut to hold the split open and start cutting up and down the bone following it around until that whole side is freed.  Repeat the procedure to completely bone your ham. Removing the skin and most of the surface fat is optional, but I like to do it to improve the smoke penetration.

Drop the halves into gallon Zip-lock bags and add several cups of apple juice to both.  Burp the bag to remove all the air you can, and refrigerate overnight, or at least 6 hrs.  Turn the bags once or twice, when you think of it.  Most of the unneeded salt will gradually move into the apple juice. The next day, dump the apple juice, and rinse the ham.  After draining for 20 minutes, thoroughly coat all sides with BBQ BOMBER.  Cover, and let your ham rest for a couple of hours as it absorbs the BBQ BOMBER. Build a medium charcoal fire and when it’s well-lit surround it with unlit charcoal (lump has no binders or additives to give an “off” flavor as it lights) which will gradually ignite to give long-lasting heat, and add plenty of smokewood chunks.  Add more wood as needed to keep the smoke plentiful.  I will use a Big Green Egg with a baffle (the plate) between the meat and the fire.  If you don’t have a baffle or waterpan between the meat and the fire, you will need to rotate the ham every 30 minutes or so to keep from scorching it.  Just leave the top vent open a fat crack, and close the bottom about ¾.  Bring your temperature to 220-250 with lots of smoke. When your temperature is stabilized and the pit is thoroughly heated, start the two pieces with their cut sides getting maximum exposure to the smoke and cook for one hour, until they show some color from the smoke.  After 60 minutes, reassemble the two halves and tie them tightly. This is your payoff for all the work splitting the ham, because you just put a layer of smoke and spice right in the middle of the ham. Since the brine’s been stripped out, the meat has plenty of room to absorb all that delicious flavor and as your ham finishes cooking the smoke and spice flavor will infuse all through it.  Continue cooking for another hour or two until a meat thermometer in center of the biggest chunk hits 145-150. (Remember, it’s already “fully cooked”)  Pull your ham and quickly wrap it in foil. Let it stand at least 30 minutes to equalize temperature throughout.  I like to let my ham rest in a pre-warmed ice chest so it stays nice and hot.  Slice and serve, and enjoy smoky flavor in every bite! 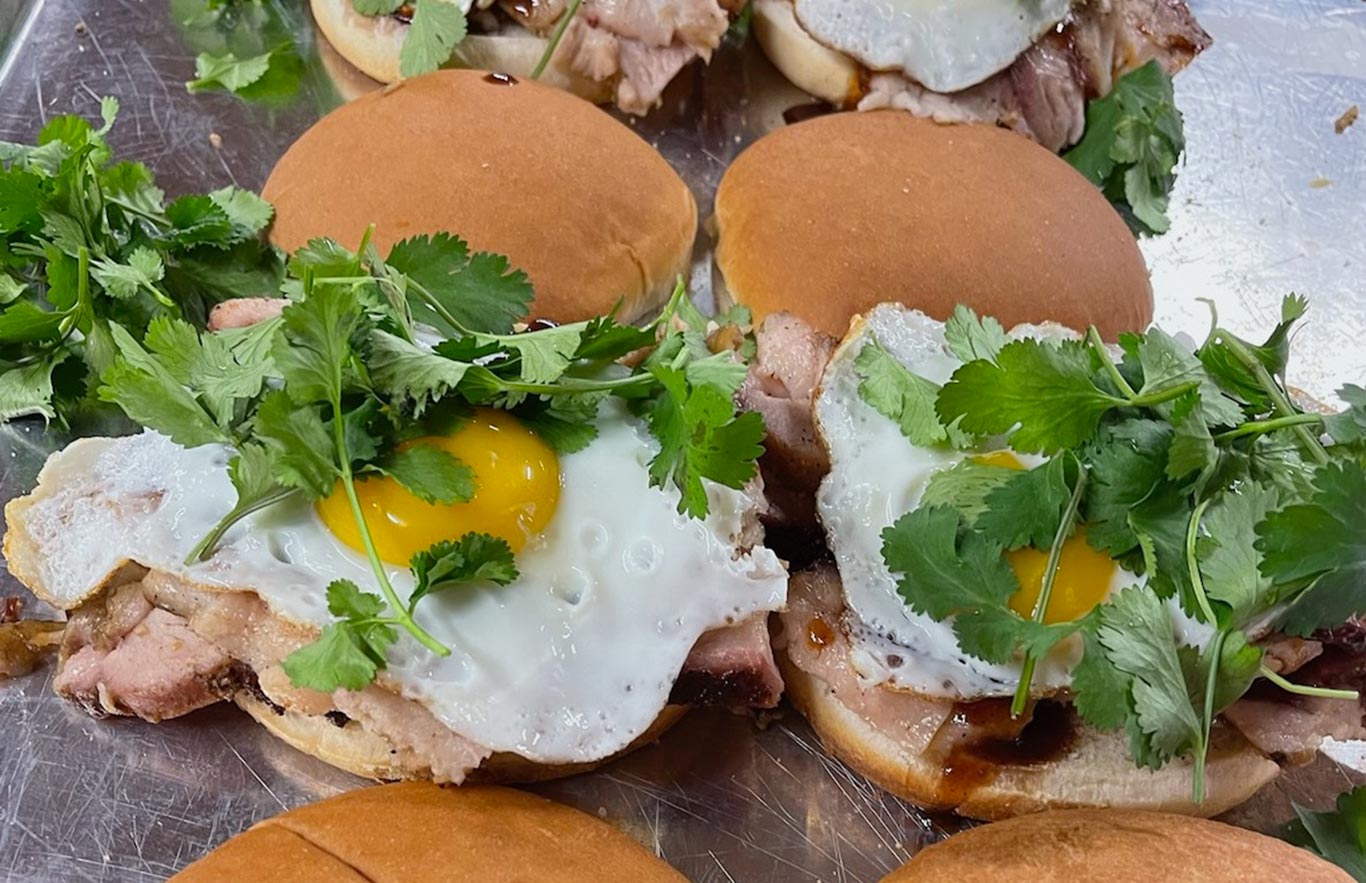 How to create a killer pork belly sandwich with a handful of carefully chosen ingredients that will impress you family and guests.